We are delighted to announce a new event in the Harbour this year which is being co-organised by Bembridge Harbour Authority and the Yarmouth Gig Rowing Club to promote fixed seat rowing. Perfectly suited to Island communities, it’s one of Britain’s fastest growing water sports, appealing to all age groups and with several generations of a family often rowing together (and worth noting that worldwide, 70% of gig rowers are women).

"Bembridge Gig Fest" is a gathering of traditional, fixed seat rowing boats, such as gigs, galleys, skiffs etc, with fun "Barbarian" style racing for mixed crews on Saturday and some (slightly ...?!) more serious club racing on Sunday. Races are informal and will be supported by Brading Haven Yacht Club.

Yarmouth Gig Rowing Club (YGRC) will be bringing their 34' long gig Sea Spirit, with a crew of 7 including the Cox, and the wonderful Rosemary - one of only 5 remaining 30’, 4-oar wooden Solent Galleys, built in 1954 and originally owned and raced by Newport RC. YGRC works in partnership with the West Wight Sports & Community Centre where regular indoor rowing machine sessions are held over the winter months to train race crews for the forthcoming season, and with public sessions to encourage more to enjoy rowing on water.

A number of rowing clubs are making the journey over from the mainland (by oar!) to attend the event, which will include an opportunity on Saturday evening to mingle and chat about all things rowing, whilst enjoying local fare and a bevy or two, to the sounds of the Harmonix acapella choir (who benefit from the talents of several YGRC members) and fabulous Island band, the Nuberryz.

Solent Galley 'Rosemary' is back in the water (Despite the temperature) 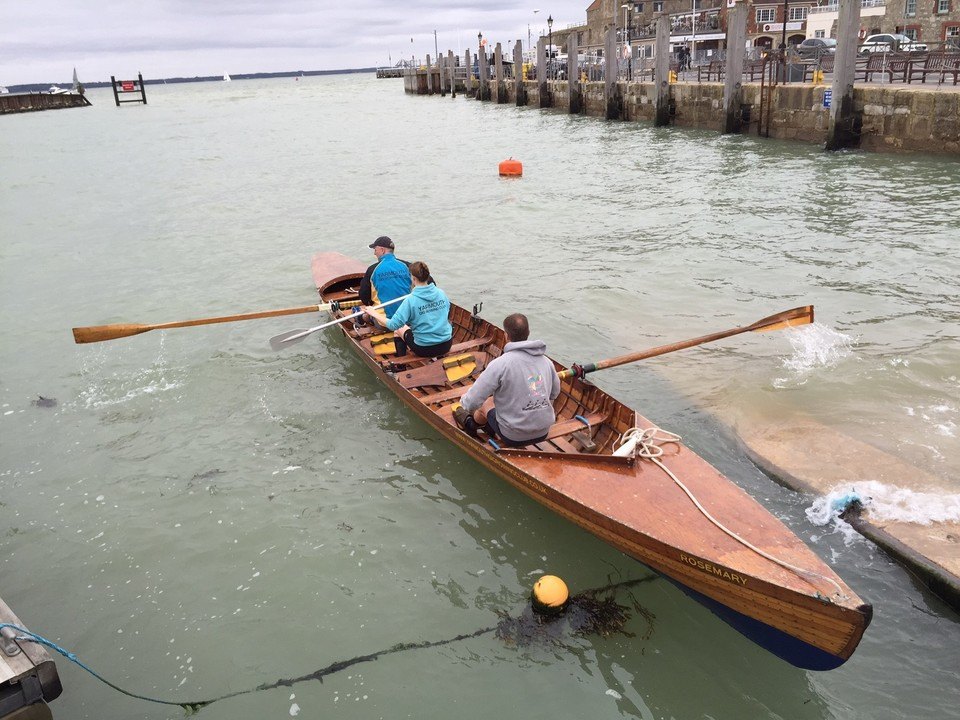 This classic boat is over 60 years old and is the type that still holds the round the Island record for a 'fixed seat' rowing boat!

It is hoped that she will back in the water this spring. 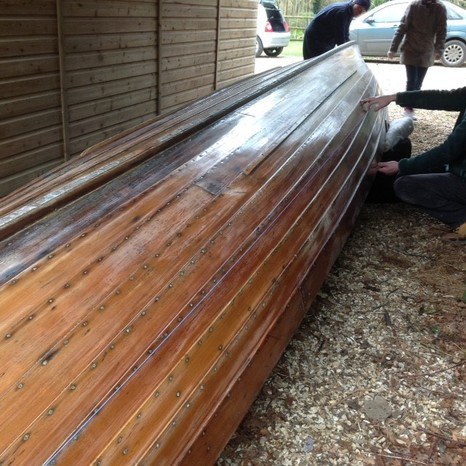 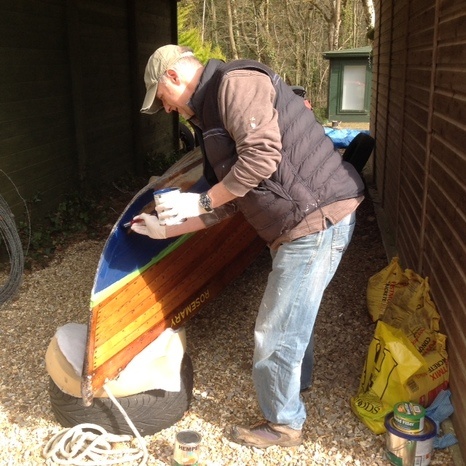 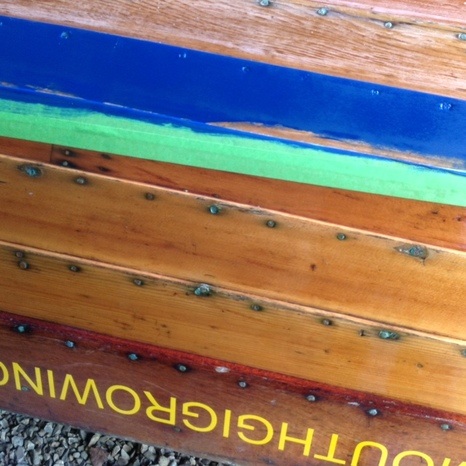 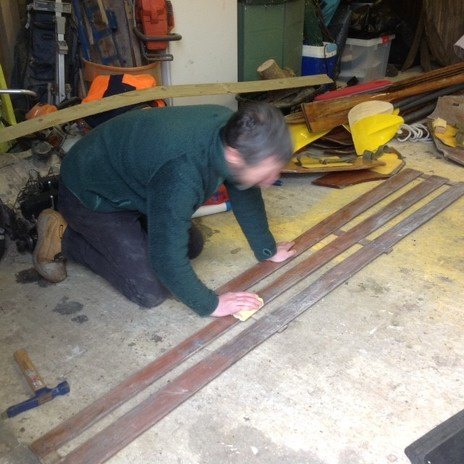 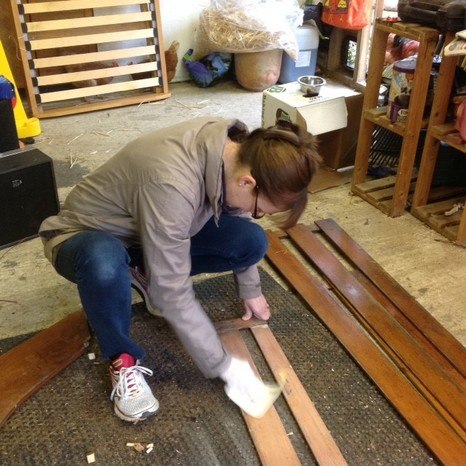 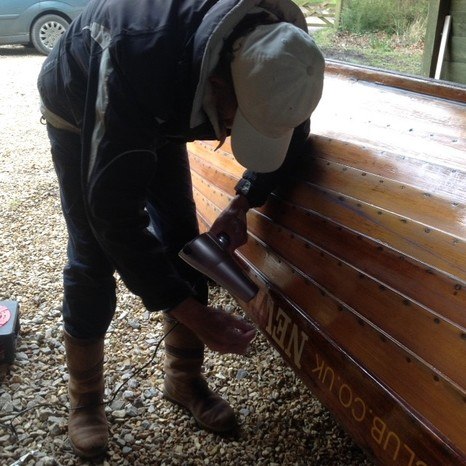 Members of Yarmouth Gig club had great fun challenging local kids and adults to out-row each other on a rowing machine on the morning of January 30th.

Many people attended the annual Farmhouse Breakfast event at West Wight Sports and Community Centre that highlights both the ideals of fitness and good food that was provided by local suppliers and farmers.

Lots were keen to see how far they could row in just 4 minutes and were surprised how hard this type of sprint challenge can be! The gig crew present were very impressed with the effort and enthusiasm demonstrated by all, but especially with several of the 12 years and under children, who showed unexpected levels of natural talent and determination!

Many thanks to the Sports Centre and Buttercup dairy for providing prizes for the winners.

We are very happy to announce that Yarmouth Gig Rowing Club has been accepted as an official user of the Community Hall of Yarmouth & District (CHOYD).

As well as being a base for meeting, fundraising events and training, the location of this institution within the heart of Yarmouth will allow the rowing club superb access to the harbour and It is hoped that such a symbiotic relationship with this newly established community organisation will be of equal benefit to the growth of CHOYD

Thanks to the kind generosity of two of our members, the club now has permanent use of the 60 year old Solent Galley that has been on hire from Newport Rowing Club for the last year. This is a great boat for both training and competition and is one of only 6 of its type still in existence!

We still need to raise enough funds to buy a Gig, but the Galley is a fantastic way of keeping us afloat and competitive.

We have a boat (but we still need another)

Yarmouth Gig Rowing Club has been unanimously accepted as a member of the Cornish Pilot Gig Association!

This is a significant achievement and opens up many previously inaccessible avenues for the long term funding and future of the club. We can also now look for support from British Rowing, who aim to substantially increase the accessibility and profile of Gig rowing throughout the UK.

Many thanks to all of you that have taken on important roles, formulated the constitution and designed the way forward for us all.Special thanks for John Derry-Collins for traveling to the West Country as our official representative and making lots of interesting contacts that even include an invitation to race in Holland!!

Working in Partnership with